I’m not a financialization maxi.

Without a doubt, financial innovation and responsible and appropriately supervised financial engineering unlock tremendous value for society that wouldn’t otherwise be available, like buying important, expensive things, investing for the future, expanding production and ownership, hedging risk and much more. Finance is a set of tools that enables these activities, allowing people to have richer experiences and ultimately live better lives.

Most, I think, would agree that finance isn’t a valid end goal in itself. In fact, observation suggests that the more financialized the world becomes, the greater the systemic risk of widespread value destruction and loss.

I use this lens when I look at DeFi. There are huge advantages in codifying transactions in transparent and immutable logic, and the real power comes when those composable building blocks can be used to create richer digital and real-world experiences. Many of these experiences will use or require finance, just like home ownership or investment in future growth do today. The new economy that’s being built in web3 has other primitives and utility services in addition to crypto/DeFi, including property rights, ID, native assets and more.

I’m interested in an emerging space within DeFi/web3, NFT lending, for what it shows us about the innovation process, the role of finance in enabling new economies, and potential future directions in the evolution of NFTs.

Outside of the crypto community, NFTs have been (mis)understood to be JPEG collectibles and digital art. NFT collectors, users and creators see the assets as a foundational primitive of a new digital economy, a view that I’ve come to share.

In addition to NFTs as art, we’ve also seen NFT projects conceived/built around the following use cases:

Plus combinations of uses on this list, and more I probably haven’t seen yet.

If you’re into confusing infographics, we’re here for you: 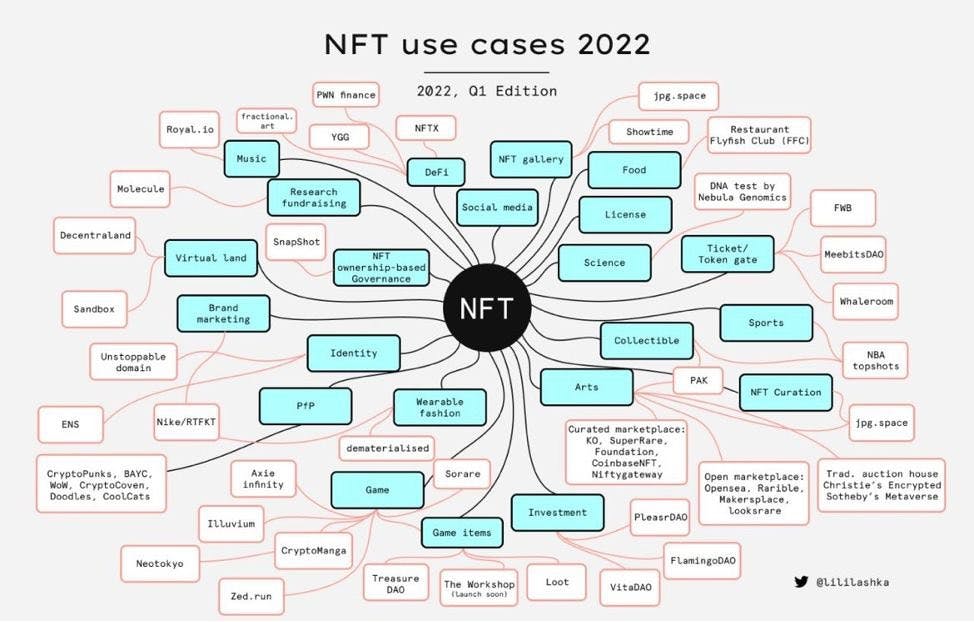 These are use cases. NFTs, as transferrable, non-replicable digital assets with ownership rights and benefits lend themselves to markets.

As digital assets, NFTs can also be “financialized,” creating further value for owners and communities, including through:

Use cases plus markets plus financialization equals an economy.

In order for the NFT economy to work optimally, assets need liquidity. The alternative would be equivalent to today’s real economy functioning without credit. Consumption, investing and homeownership would be harder if not impossible, slowing the pace of progress.

So lending is a natural need as the NFT economy evolves. Yes, borrowing and lending can be used for financial profit-seeking, risk taking and speculation, and they can also be used to underpin scalable, valuable markets that cannot function efficiently without them (equity markets are a good example).

There are a number of projects building NFT lending, including NFTfi, Arcade, Nexo (CeFi), JPEG’d, Drops, Astaria and surely many more I’m not yet familiar with.

Each project has a slightly different approach. Nexo, for instance, is effectively a TradFi lending desk, while the others are intended to be, to varying degrees, decentralized protocols – new Lego pieces in the composable web3 toy box.

A loan is a contract with clear parameters and terms. Even the most complex loans simply involve extra parameters and terms, for instance extra collateral, counterparties, rates, fees, options, timeframes, rights etc., but they can still be precisely described in contract logic, and by extension, perhaps even more perfectly, in code.

In an analog world, the most a software loan contract can do is trigger a notification to a banker, borrower, trustee or custodian, who must then process it by actually taking action to make a phone call, email a lawyer, trigger a liquidation or hire a collection agency.

In a web3 world, software loans can resolve themselves.

NFTfi is the current market leader in NFT lending, with over $200m in cumulative volumes across over 12,500 loans since its launch in June 2020. 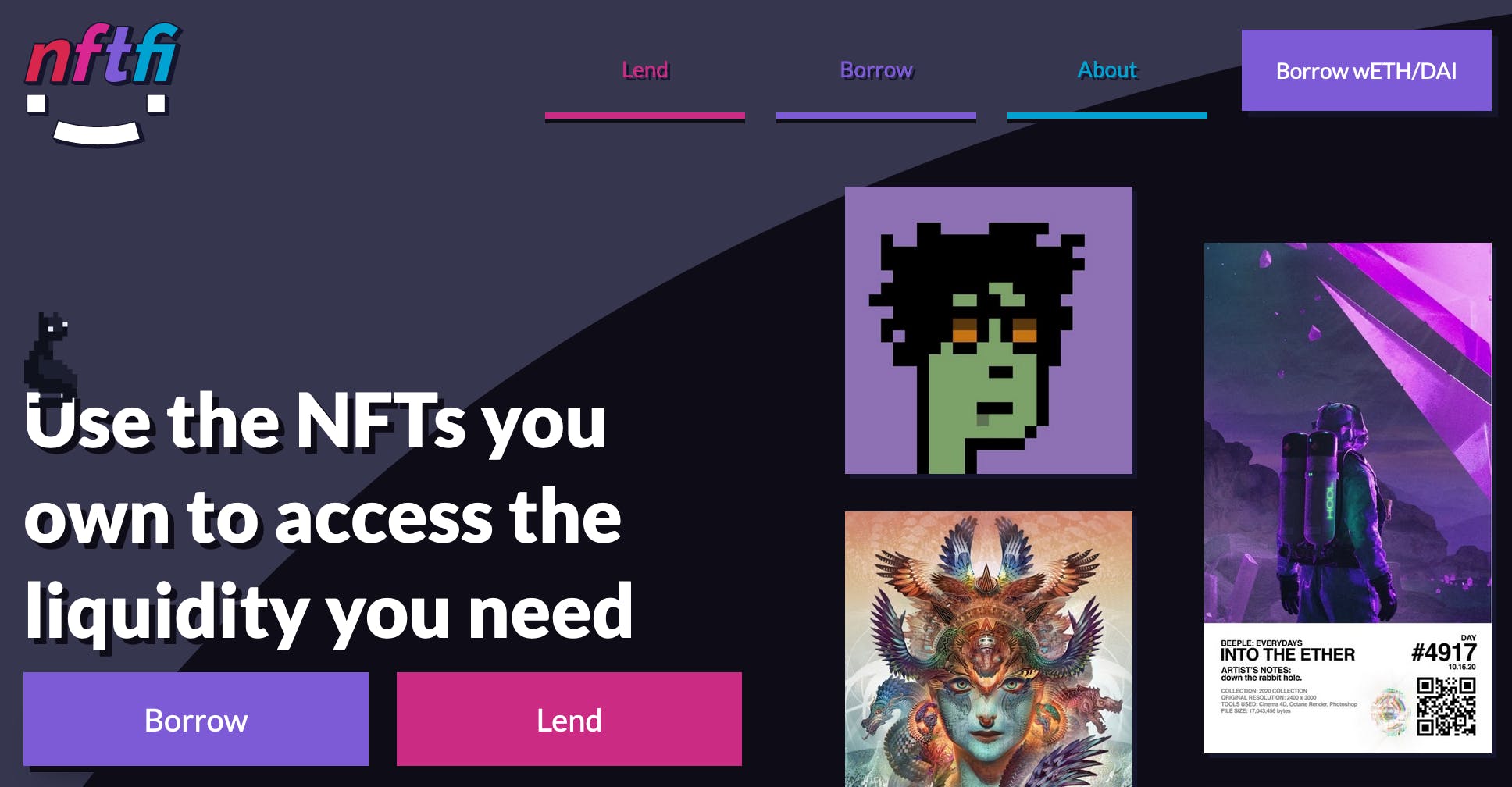 In total, over 1,000 borrowers have used NFTfi and over 600 lenders. An impressive 155 NFT projects have been used as collateral, according to data compiled by @gideontay on Dune Analytics.

Market stats are as follows for the month of June so far, after NFT prices got crushed in April/May:

A key feature of many NFT lending protocols, including NFTfi, is that borrowers cannot be liquidated, and there are no margin calls. As a result, platforms like NFTfi can be used by lenders in an effort to acquire high quality NFTs cheaply, through defaults. However, this is a double-edged sword, in that if an asset falls in price, the borrower can simply walk away from the loan, with the lender taking ownership of the asset. I expect a fair number of NFTs changed hands through NFTfi between April-June.

Arcade is another NFT lending platform that went live more recently, in January 2022, following a $15m Series A round in late-2021 from a handful of investors including Pantera, Franklin Templeton, GoldenTree and others.

Arcade is the first offering from NFTech, a company/venture studio building infrastructure for the NFT economy. NFTech built a lending protocol called Pawn Protocol in 2021 and subsequently launched Arcade, the consumer application, on top of it. NFTech’s aim is to build numerous companies serving different parts of the NFT economy, supporting growth and value creation in the space. 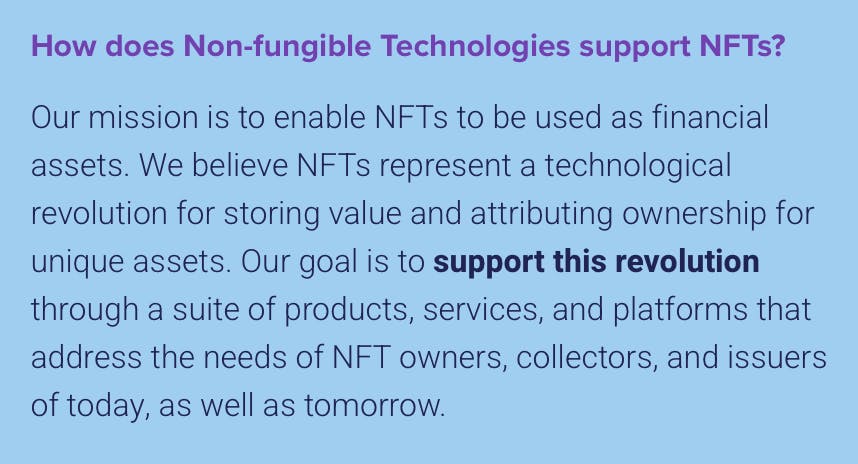 In addition to simply accessing cash against a portfolio of blue-chip NFTs, there are a few other reasons borrowers might seek loans on their NFTs, including accessing liquidity against a highly appreciated NFT collection without triggering tax consequences, obtaining cash to pay tax on other crypto gains or accessing yield through DeFi trades.

Blue-chip NFTs have gotten crushed recently, along with the wider crypto market. Albeit, price declines lagged cryptocurrencies by many weeks.

Coop Index’s JPG NFT Index is trading around $24 as of mid-June, down 75% from levels seen just two months ago, which has put a major damper on NFT lending activity over the past few weeks. As a result, Arcade has done virtually zero volume in June so far. NFTfi, by contrast, has continued to see some activity.

Arcade v1 supports peer-to-peer NFT lending using one or more high quality NFTs as collateral. Only certain collections are supported, but the list is long compared to alternative NFT lending platforms which focus on blue-chip collections. Realistically, transactions only make much sense for the most noteworthy of blue chip NFTs, namely Bored Apes and CrytoPunks. Even less established blue chips get low LTV (10-30%) and high APY (60%+), limiting the benefits to the borrower.

Arcade is unique in that borrowers can offer multiple NFTs as collateral for a single loan, unlocking more liquidity for collectors.

The platform design & flows are worth examining in the context of where digital asset lending can go. 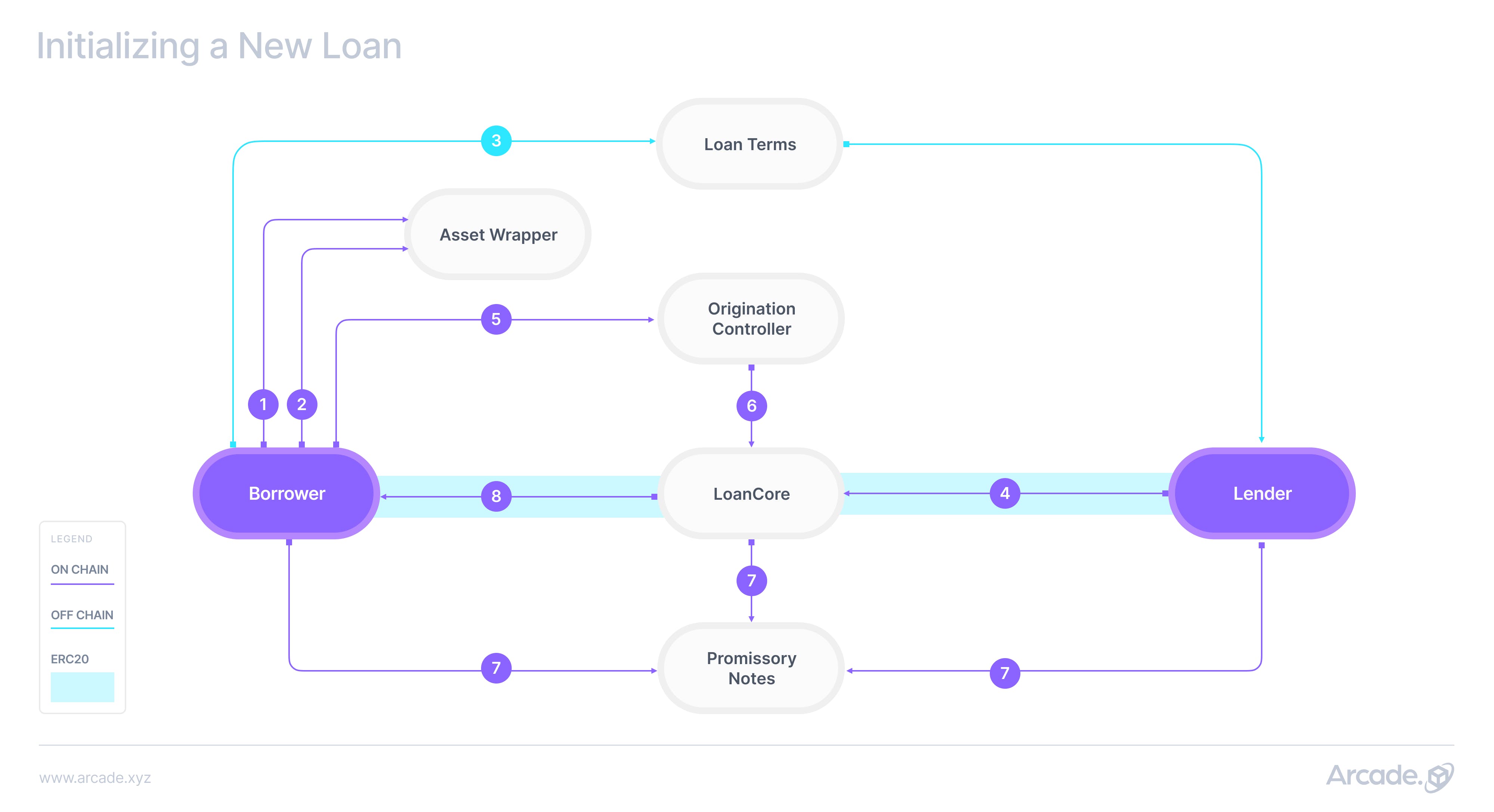 Currently, all Arcade loans are bullet loans, meaning all principal and interest are repaid at once, at conclusion of the loan term. In v2, expected soon, installment loans will be supported. Upon fulfillment of the repayment obligation, the borrower’s wNFT is returned to them from escrow. 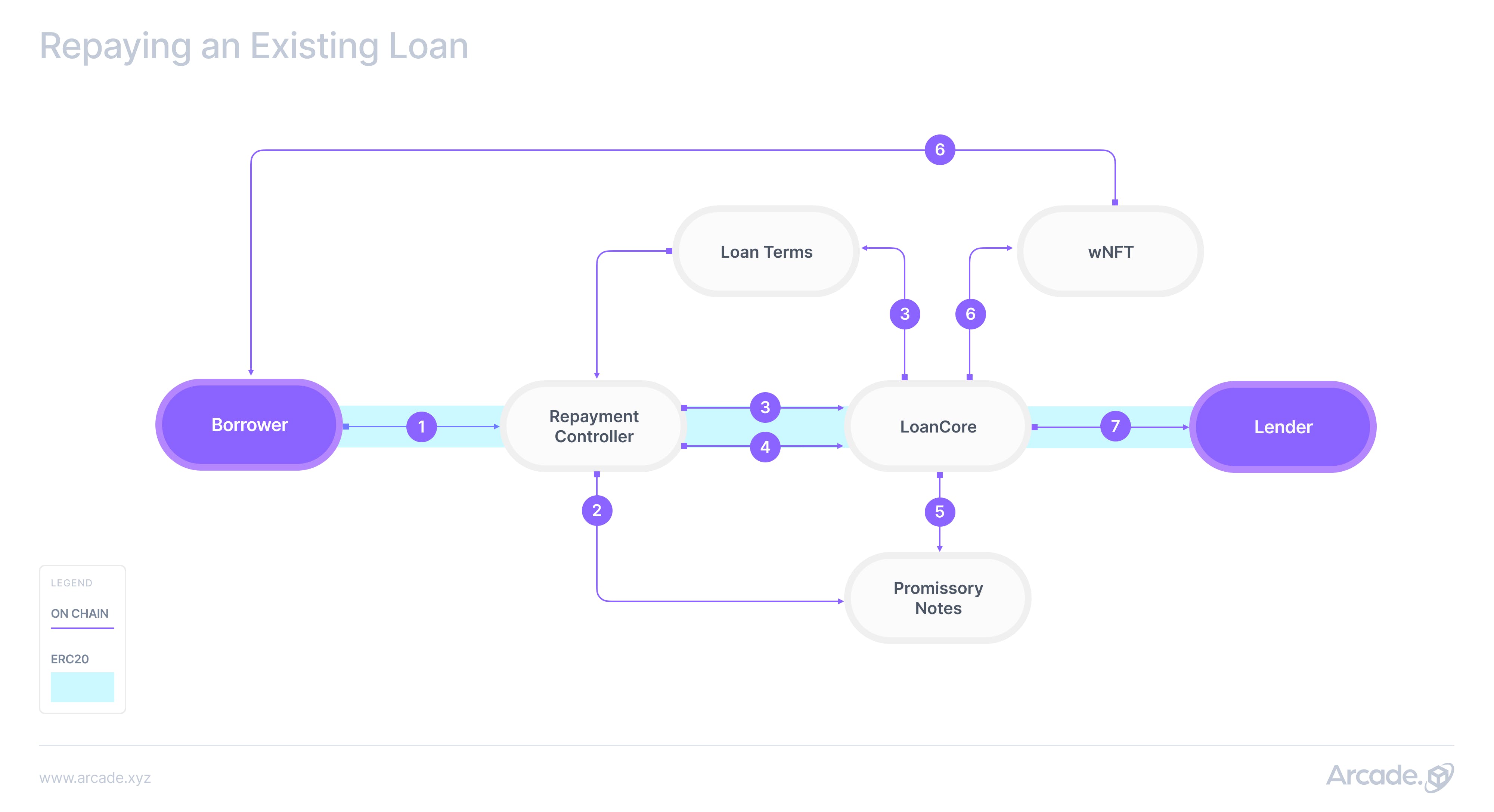 In the event of default, the lender can trigger a claim on the wrapped NFT collateral, which is automatically transferred to his/her wallet in lieu of repayment. Arcade doesn’t currently support renegotiation of loan terms, extensions, partial defaults or loan rollovers, but more flexibility is being developed in v2. 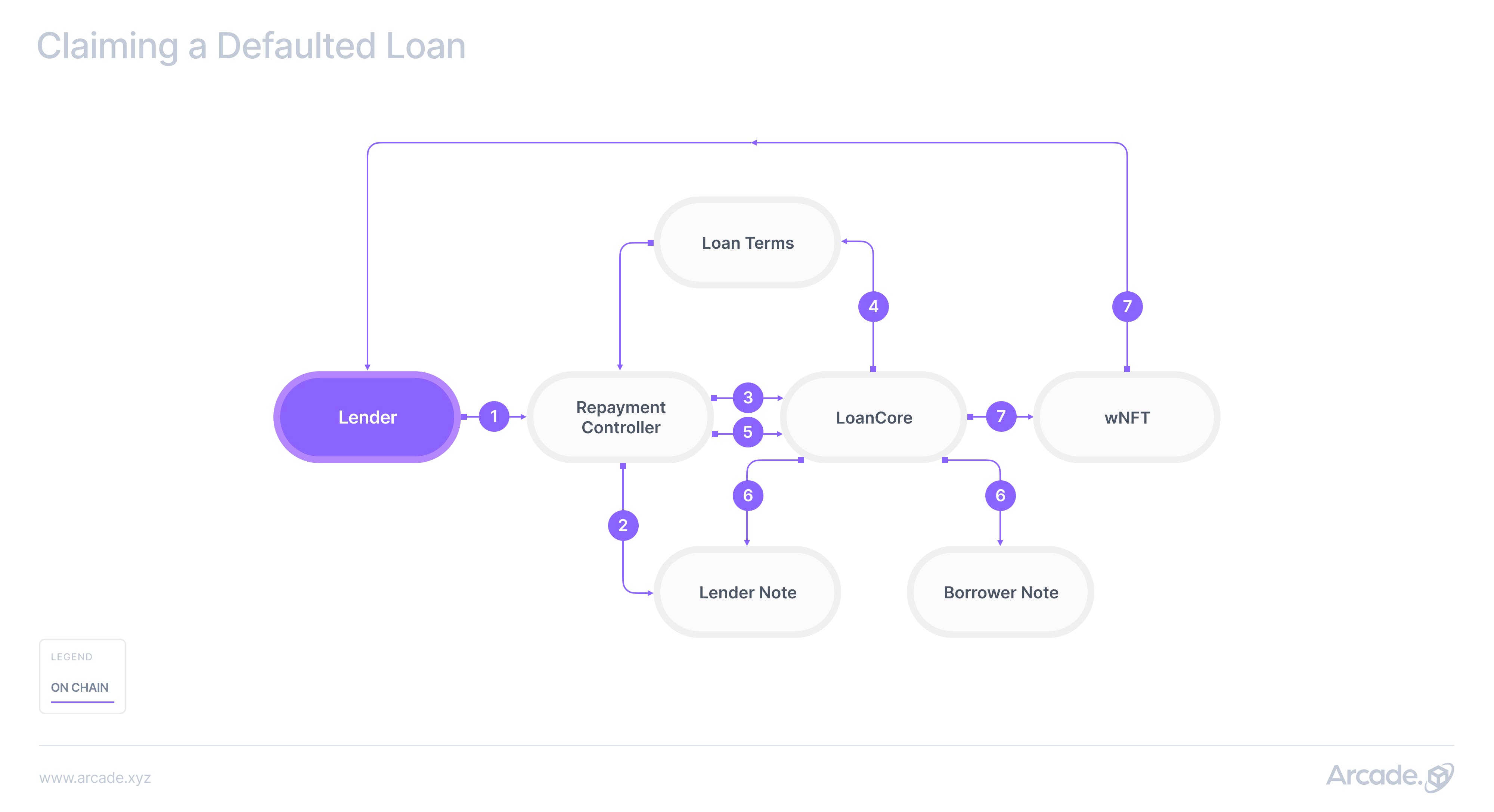 ​According to a Dune Analytics dashboard created by @sdlep, there are $15m in loans outstanding through Arcade, between 42 lenders and 51 borrowers. April 2022 was by far Arcade’s biggest month, followed by a slowdown as market conditions deteriorated in May. Arcade has only been live for six months, so data and performance so far are limited. 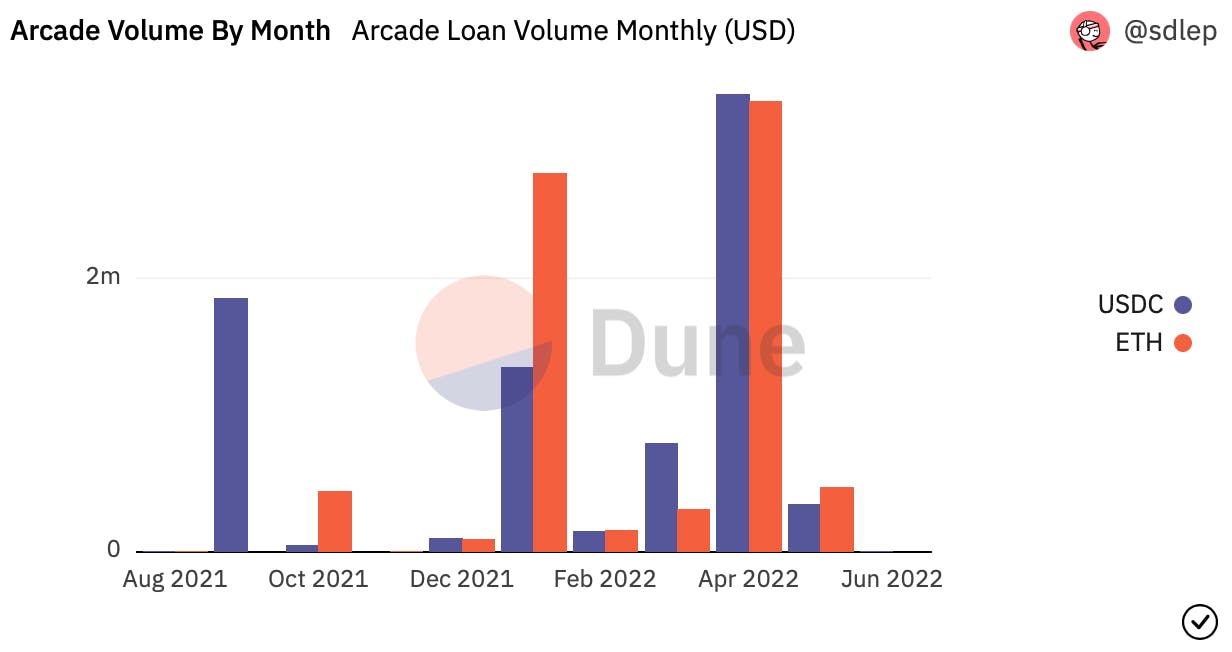 The NFT lending space is nascent, having naturally followed the NFT boom that started in 2021 with digital art. As NFT use cases evolve, lending protocols will track their direction.

NFTfi, Arcade and their competitors will continue building, eventually supporting increasingly complex loan types, purely programmatically. More powerfully, they will evolve their protocols to support trustless, fully automated borrowing and lending for other types of NFTs beyond blue-chip art/collectibles.

At the same time, NFT use cases will continue to advance rapidly. Not only will creator, community and gaming use cases likely flourish, but new, potentially even larger scale use cases will likely evolve, including the tokenization of real assets.

Today, we see low LTV peer-to-peer loans on CryptoPunks created, administered and closed trustlessly and automatically. Next, we’ll see instant loan liquidity through AMM-like approaches to NFT lending/borrowing. Astaria, co-founded by SushiSwap CTO Joseph Delong is one such example. Increasingly, we’ll see protocols for the lending of NFTs themselves to borrowers that wish to temporarily access their benefits, be they for gaming, community membership, event access or other. 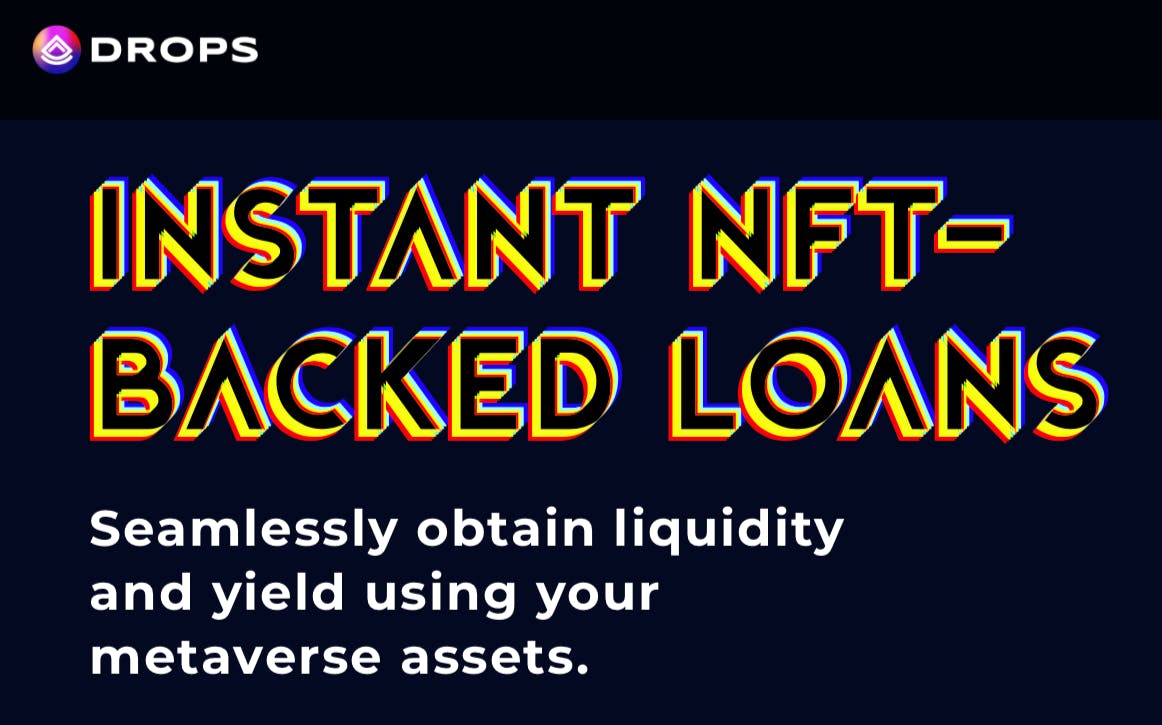 Eventually, we may see trustless, automated lending against tokenized real assets. What is a tokenized deed on a home but an NFT?

The bigger question I have is whether (probably?) and how today’s web3, real and financial asset economies will ultimately converge. Will it be through fungibility/frictionless conversion of crypto & fiat? The extension of NFT features and infrastructure to traditional assets? Something else?

Whatever the mechanism, I expect that this unified future, when it arrives, will feel as normal as ordering a book on Amazon does today — meaning just as inconceivable as it would have seemed just a few years before it became the new norm.